Imagine that you go away for a few days of vacation. While you are away it rains cats and dogs at your home, but your irrigation system is programmed to water. Since you aren’t there to stop it, a lot of water is wasted irrigating a landscape that doesn’t need it! Sound familiar? This problem repeats itself again and again all over the U.S.

A rain shutoff device or a soil moisture sensor can take care of this problem and improve overall irrigation management. These products are inexpensive ($25 – $250) and easy to install on just about any sprinkler clock.

Rain shutoff devices and soil moisture sensors have been proven to save water and money. Some cities, such as Cary, North Carolina now require one of these devices to be installed on all new sprinkler systems.

Rain shutoff device and soil moisture sensors differ in how they control irrigation, so they are described separately below.

A rain shutoff device (also called a rain sensor) is designed to halt irrigation in response to rainfall. Most rain sensors are adjustable and allow you to specify the amount of rain that must fall before irrigation is stopped.

A number of rain shutoff products are available and they are all compatible with almost all sprinkler clocks. Some examples of these devices are shown here in Figures 1 – 3. 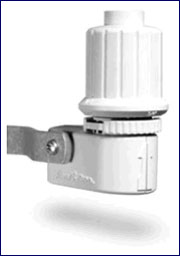 The device itself is installed in a clear location where it can receive the full amount of rain that falls without excessive splashing. Typically the sensor is placed on a roof or the side of a building near the irrigation controller so that the wires can be easily run from the sensor to the clock. It is important to check the sensor frequently to make sure it isn’t fouled by leaves, debris, or even bird droppings. 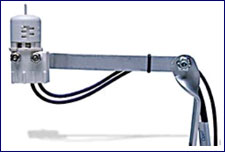 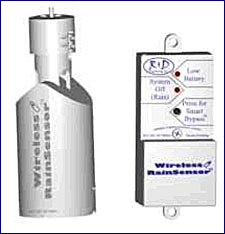 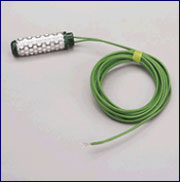 The soil sensors (usually a pair) are installed at mid-root depth in a representative portion of you landscape that is only watered by a single irrigation zone. A pair of wires are run underground from the sensors back to the sensor controller, which is usually placed next to the irrigation controller. The wiring at the controller is quite similar to a rain sensor and the common/ground connection is used to override irrigation.

Which System is Right for Me?

If don’t like to re-program your sprinkler clock and prefer a system that does more of the irrigation management for you, then a soil moisture sensor system is probably the right choice. These devices control irrigation in such that there is always sufficient moisture in soil at the roots.

Soil moisture sensors are not an “install and forget about it” type of product. You still need to carefully monitor the performance of your sprinkler system and the condition of your landscape and make adjustments to the sensor controller and your irrigation timing.

However, once these systems are properly tuned they should eliminate a lot of the system management work. Although this systems can commonly become out of tune and do require a fair amount of attention and retuning.

William Lowe
William Lowe graduated from the University of Southern Maine in 1994 with a Bachelor of Arts in English. Lowe has been active in the landscaping and home design trades since 1990.