Though moonflowers are poisonous, they have long been used in landscaping gardens, for their looks and because they grow so well. In some places in the Southwest, they are literally a weed and have a variety of other names like Jimson Weed, Devil’s Weed, or Witch’s Weed to name just a few.

The effects of ingesting this plant became somewhat more publicized when a group of teenagers ate part of the plant and ended up in a hospital, two of them ending up in intensive care.

While those teenagers did all recover from their experience, others who live in places where moonflower bushes grow continue to ingest parts of this plant. But what exactly is a moonflower bush, and what happens if you do ingest it? More importantly, why would anyone intentionally eat this plant?

Moonflower vine, also known as Ipomoea alba, is commonly confused with Datura by many people, because of their similar appearance. Moonflower is the common name for both plants. Moonflower vine (Ipomoea alba) shows low toxicity. It is safe to touch and save seed pods for next years seedlings.This article is referring to Datura. At the end of the article, you can see the differences between Ipomoea and Datura. 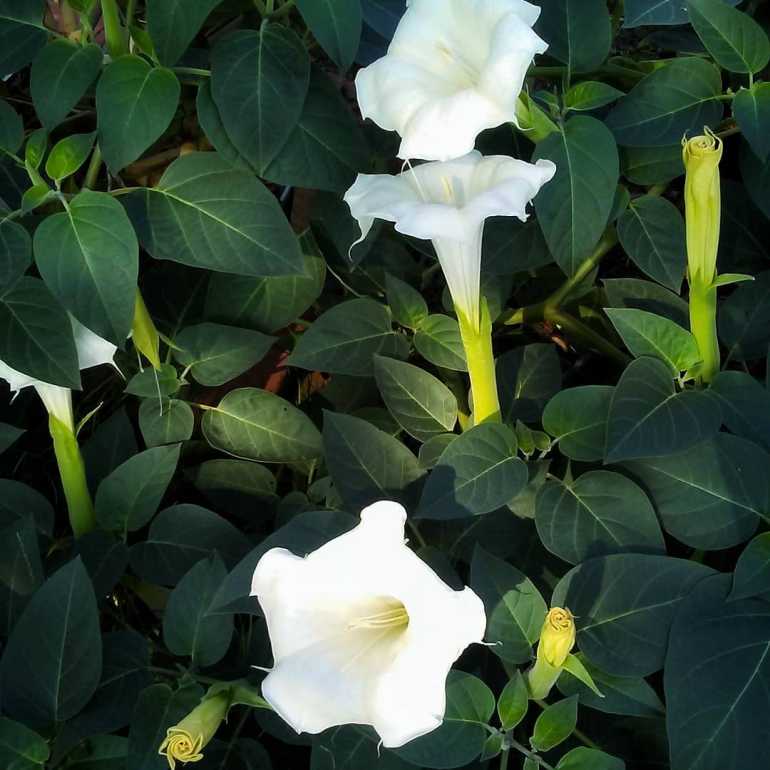 They mostly bloom at night.

Moonflowers are a fair-sized bush that grows to around three feet or more in height. Although it’s considered a weedy plant, it’s extremely pleasing to the eyes.

It gets its name from the fact that its 4″-6″ blooms open late in the evening, stay open all night, and then wilt soon after the sun comes up.

In fact, the moonflower blooms from April to October.

If it’s cloudy outside, they may open their flowers earlier than expected and stay open for a longer period of time. It all really depends on the temperature, the weather, and the humidity.

Hawkmoths are unique insects that pollinate the moonflowers at night. Watch a moonflower when it’s dark outside. You’ll more than likely see hawkmoths hovering over the flowers. What they’re doing is unfurling a really long proboscis into their floral tube as a way to extract the nectar. It’s quite a sight to see.

If you’re looking for moonflowers, you’ll find them in ditches and along roadsides. Once you see these flowers, you’ll know. Look for large, dark green leaves.

The trumpet-shaped flowers can come in a few different colors, and they have a slight but pleasing, sometimes lemony, fragrance. However, their leaves have an unpleasant odor.

The stems and leaves tend to have a slightly fuzzy texture and to be lush green in color with a hint of blue, the numerous pods that contain the seeds being covered in small thorns.

What are the effects of the moonflower?

Perhaps the most notable of the effects is the hallucinogenic side effect that it causes, and this is why there is a danger of teens and young adults intentionally trying to consume part of the plant.

It only takes an hour, sometimes less, for the effects to start being noticed. While hallucinations might be one of the first symptoms of ingesting the moonflower bush, this plant has many compounds that are all toxic to the human body in various ways.

One toxin can affect the nervous system, preventing the person from being able to regulate their body temperature and potentially resulting in hyperthermia or overly hot skin. Another toxin affects the heart rate and blood pressure to the point where going into cardiac arrest is a real possibility.

The toxin of the moonflower can also affect your intestines and bladder. Sometimes this causes nausea or extreme thirst due to a dry mouth, while it can also prevent people from having a bowel movement or relieve oneself. This can cause a medical emergency if the person drinks a lot of fluids due to thirst and is then unable to empty their bladder and this also keeps the toxins in the body longer.

These symptoms can continue for 24-48 hours and can potentially lead to seizures or a coma. If you or your child has eaten any part of the moonflower plant, you should immediately go to the hospital. While the hallucinations are perhaps the most appealing side effect, the toxins from the moonflower bush can also cause anxiety, worry, and agitation, all in all making it a far from a pleasant experience.

What parts of the moonflower bush are poisonous?

All parts. It is not safe to consume any part of the plant’s roots, stems, leaves, flowers, nectar, seed pods, or seeds. Even the sap of the moonflower is poisonous.

Those who attempt to use this bush as a hallucinogenic usually do so by either eating the seeds, which depending on the variety can sometimes have the most potent effect or by making a tea by boiling part of the plant in water and drinking that. Some have also tried ‘smoking’ the leaves or roots.

Are moonflowers poisonous to animals?

Yes. Most animals will naturally avoid eating it due to the pungent smell it puts off when the leaves are crushed, but sometimes a curious pet might decide to try just a taste.

Moonflowers are poisonous to everything from horses to chickens, pigs, cows, and sheep as well as to cats and dogs. Essentially it is wise to keep this plant away from all animals.

Just like every part of a moonflower bush is poisonous to humans, every part is also toxic to animals. Any animal that eats this plant or chews on the leaves should be taken to the vet immediately as one of the effects that it can have on pets is respiratory failure which easily causes death.

A sign that your pet has eaten it could be that they stagger around looking almost drunk. It can also cause convulsions and seizures and can affect their bladder and bowels among other things as it can do to humans who eat it.

The difference between Ipomoea and Datura

So, how do you tell the difference? The thing that makes it difficult to tell these two plants apart is their appearance. For your own safety, it’s good to know the difference between these two.

Sarah Byrd
Sarah Byrd has written about gardening for both online and print publications. She completed two writing courses at Pierpont Community and Technical College.

I have been stick in the finger by the prickly fruit of it and now have a dark circle in the same place. What should I do?

My Holland lop bunny eats the flowers after they’ve closed up with no issues. Is it toxic to them as well?