Is duct tape magical? It sort of seems that way sometimes—after all, duct tape is both easy to tear by hand, yet incredibly durable and long-lasting. It’s super strong and water-resistant, capable of many uses both indoors and outdoors.

If you’re looking to use duct tape for various projects, it’s important to know the qualities and limits of this unique product. For example, you may be wondering, “Is duct tape flammable?” If it is, then that quality does remove it from viability for certain projects. In this guide, we’ll talk about duct tape flammability and some other unique qualities of this one-of-a-kind product.

Technically, part of the duct tape is flammable. The fabric-like mesh at its core is flammable, yes. But that same fabric is coated with polyethylene, which won’t burn. And the adhesive used for duct tape includes rubber, which doesn’t burn either. That means duct tape isn’t technically a flammable product. 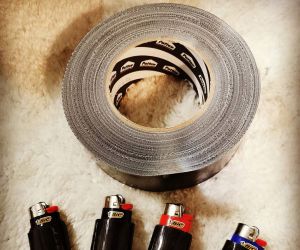 Perhaps a better question would be, “At what temperature does duct tape melt?” Due to its polyethylene and rubber components, duct tape will eventually soften and melt under extreme heat. At a certain temperature, it will begin having difficulty sticking to surfaces. It will turn more malleable and less sticky, making its glue effectively useless.

Once it gets above 140 degrees Fahrenheit, you’ll notice a significant reduction in duct tape’s adhesive endurance, which basically just means it won’t stick as well, for as long. Around 180 degrees, you’ll definitely notice a lack of adhesive quality as the rubber components degrade and begin to melt.

What Are the Specific Industry Standards for Duct Tape?

According to industry standards, duct tape must be a non-flammable substance. It needs to be safe for use up until about 200 degrees Fahrenheit.

You definitely don’t want to try to use it to seal heating ducts, because duct tape has been tested in that capacity in multiple studies, and it fails every time. So if you were planning to employ it as a quick, full-sealing adhesive in your HVAC system, that’s definitely not a good idea.

Why Was Duct Tape Created?

Did you know that duct tape was originally designed for the military? In the old days, the military would seal packages of ammunition with wax to keep water from getting inside. However, the paper tape and tabs used to allow soldiers to open those ammo packages weren’t reliable.

The tabs would sometimes tear free without opening the box, leaving soldiers struggling frantically to access their ammo quickly. As an alternative, a woman named Vesta Stoudt proposed a kind of tough, adhesive, waterproof cloth tape.

President Roosevelt commissioned Johnson & Johnson to design the product, which was nicknamed “duck tape” because of its water-resistant qualities. After the war, “duck tape” was rebranded as “duct tape” and marketed it for a wide variety of home and commercial uses.

Since its development, duct tape has been used in nearly every field, in countless ways. Movie crews use it to hold together sets. Tech guys bundle cables together with it. The Apollo 13 crew survived in part thanks to a cobbled-together carbon dioxide filter that featured duct tape, among other things.

How Does Duct Tape Work?

The extreme stickiness of duct tape comes from a pressure-sensitive adhesive or PSA. PSAs are blends of soft polymers that produce a “hard” adhesive, not a moist one, that isn’t susceptible to water.

Unlike other types of glue adhesive, the PSA in duct tape doesn’t require any solvents to evaporate before the tight chemical bond is formed. It can form a tight adhesive bond instantly, thanks to superior viscoelastic properties and the power of “van der Waals forces,” a scientific term for distance-dependent interaction between molecules.

What Are Some Additional Uses for Duct Tape?

You can use duct tape around your home to hold various things together. Got a broken window screen or window glass? Cover the hole or crack with duct tape until you can replace the damaged section. You can weatherproof around your doors and windows using duct tape to close gaps or cracks. Having trouble gripping a hammer or some other tool? Wrap the handle with duct tape for a more secure grip.

Got a leaky roof? If you can’t replace the shingle right away, wrap a bit of plywood in duct tape and use that to temporarily close the gap. Are tangles of electronics cords becoming a hazard in your home? Untangle them, cluster them in bundles, and tape them to prevent a tripping hazard.

Remember that duct tape does leave a sticky residue in its wake, so don’t use it any surfaces where that type of residue would cause permanent harm, either aesthetically or functionally. Otherwise, feel free to experiment with your own uses from duct tape in home improvement settings!

Sarah Byrd
Sarah Byrd has written about gardening for both online and print publications. She completed two writing courses at Pierpont Community and Technical College.