Cherries are delicious little fruits. They come in a wide variety with the commonality of being high in nutrients and sweetness. They’re a favorite during the summer season with their juicy composition. Can chickens eat cherries? Definitely! In fact, you’ll find that they’re one of the best fruits to feed your chickens!

Cherries are rich in antioxidants and contain melatonin for sleep while fighting inflammation and pain linked to arthritis. They’re free of fat, cholesterol, and sodium. One cup contains less than 90 calories, so it’s healthy for you and your chickens.Plus, they help with controlling blood sugar and are actually good for weight loss. On top of that, they have plenty of vitamin C, vitamin A, calcium, protein, potassium and iron.

The calcium specifically is very important for your chickens in the formation of strong egg shells. The potassium plays in important role in body function, specifically, muscle, heart, kidney, and nerve cells. Other good components include anthocyanins and boron. Anthocyanins give them the red color and can help protect your chicken’s heart and other tissues. The Boron helps to balance calcium with bone health.

About 82% of cherries are water with 16% being carbohydrates and 1% being proteins with a small amount of fat.Dietary fiber is where the good stuff is including vitamins C,A, B1, B2, B3, B5, B6, K and folate.

Will cherries hurt chickens with their pits? Cherries typically have pits in them. As you can imagine, they’re a choking hazard. Cherries with pits in them worry many chicken owners, but the nice thing is that the chickens know how to and can take the fruit right off the pits and just leave the pits behind.

Cherry pits contain amygdalin, which releases a chemical called cyanide when metabolized. The amounts are small, but if they eat enough of them, it can be fatal.

Some people say that the chickens don’t chew the cherry pits up, so they cannot release the chemicals. However, if you want to be on the safe side you should avoid feeding them with cherry pits.

Can chickens have cherries as treats? Yes, even your chickens like a treat now and then. Cherries make fantastic treats. Why would you give them cherry treats? You give your chickens treats as a way to earn their trust and build a better relationship with them. Cherries make great treats for training your chickens. From my experience, it’s always nice to be able to have your chickens trust you and follow you. They are fantastic escape artists, so when it’s time to guide them back into their pens, it’s easier when they have a treat they like that they know you have. Turn into the Pied Piper of chickens!

Chickens will eat almost anything you give them if they’re hungry enough. They might be a bit picky, just like us. Typically, they’ll go for the fruits before the greens just because they’re sugary. As long as it’s soft enough to tear or small enough to take in one bite, they’ll eat it. Fruits and vegetables your chickens can eat include the following. 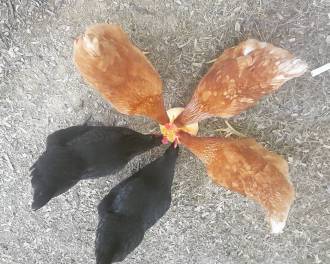 Cherry Treats for Your Chickens

Sure you can just give your chickens a handful of strawberries, but that’s not as fun as playing chef and making your chickens some gourmet cherry treats. You can leave the cherries whole, slice them, chop them, etc.Here are some ideas for some recipes with cherry treats you can try out for your chickens.

Cherries on a string

All you need is a needle, some string, and cherries. Simply thread the cherries on a string tied off at the end. Hang it on the fence in their cage or a stick suspended in their cage for them to pick at. Not only is this a tasty treat for them, but it also keeps them occupied. If your chickens are getting into trouble such as escaping or picking at each other, this is a great way to make them stop.

Chickens like trail mix too. Only, you won’t want to share it with your chickens. Get a bowl, combine a few cups of their feed with a cup of mealworms and another cup of chopped cherries. You can throw in as many types of fruits and other additives you want. Even throw some egg shells in there for a calcium boost, and you’ll have a super nutritious mix for your chickens to eat that they’ll love!

As you can see, cherries are one of the best treats for your chickens. They’re safe with little hassle in preparation.