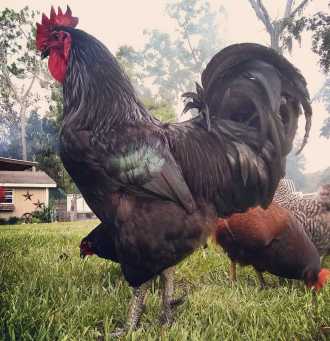 The Jersey Giant is the biggest chicken out of all the other breeds. Even though the Brahmas chicken can grow to be just about as big, the Jersey Giant on average is the largest. This chicken is pure bred and comes in four different colors, white, black, blue and splash. Besides the difference in color, the black Jersey Giant also averages about a pound more than the white Jersey Giant. Other than that, they’re similar in just about every other way.

Jersey Giants are beautiful and very gentle birds. In fact, they even acquired the nickname ‘Gentle Giants’ over the years. These chickens are very friendly and are very playful around children. 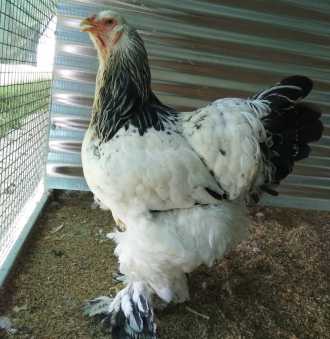 The Brahma breed is very similar in size to the Jersey Giant. However, they’re just a touch smaller. These chickens can grow to about 30 inches and have a V-like appearance when looking at them from the side. Males tend to weigh around 10 pounds whereas females tend to weigh around 8 pounds. As far as color, the Brahma chickens are either light, dark, or buff. The light chickens are a whitish color with a gray undertone. The darker chickens are usually black with a grayish lining, and the buff chicken are buff colored with a little white and black here and there.

Just like the Jersey Giant, the Brahma chicken is also very gentle and works well with children. They even get along with other kinds of breeds too. Confining these chickens won’t be a problem either due to their inability to fly well, and their thick feathers make them suitable for colder temperatures. This is good news for farmers that live in areas that experience bitter winters. 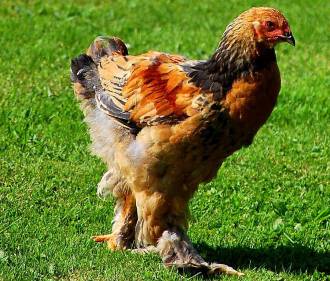 Cochin Chickens are big, fluffy, and absolutely love humans. In fact, they love to be picked up, cuddled with, and played with. These chickens are covered from head to toe in feathers and have a very unique appearance. Although their feathers make them look a lot larger than they actually are, they still weigh an average of 8 pounds. Cochin chickens are either light or dark feathered, and have red earlobes, wattles, and a five-point comb.

Cochin chickens tend to be attacked by their predators much more than the other chicken breeds due to the fact that they’re both lazy and in many cases obsess. The great thing about these chickens though is that they usually lay most of their eggs during the winter. Since a lot of other chickens don’t, this is definitely a reason to own a few Cochins. 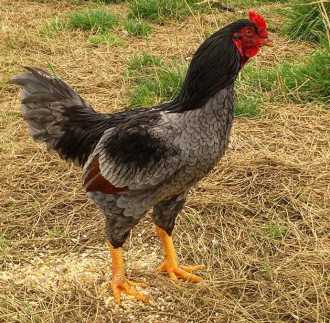 Male Cornish chickens usually weight about 8.5 pounds whereas the females typically weight 5.5 pounds. They’re not really friendly like the Jersey Giant, the Brahma, or the Cochin. In fact, they’re much more aggressive and need a lot of more space in comparison to other breeds. The good thing about the Cochin breed is that they can handle all kinds of temperatures, both hot and cold. 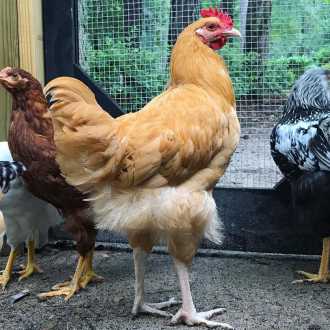 The Buff Orpington was created when a man by the name of William Cook crossbred a Gold Spangled Hamburg, a Dorkling, and Buff Cochin to create this breed of chicken. The idea was to create a large bird with several purposes. Today, the Buff Orpington can lay anywhere from 200 to 270 eggs every year and if raised as a meat source, these chickens can be ready for production as early as 22 weeks. They’re a very useful chicken and considered a dual-purpose breed.

The Buff Orpington is both dark and light colored and weighs on average around 10 pounds for males and 8 pounds for females. Like many of the breeds listed in this article, the Buff Orpington is a very friendly chicken and enjoy being around children. They’re playful and definitely a fun bird to have on your farm. 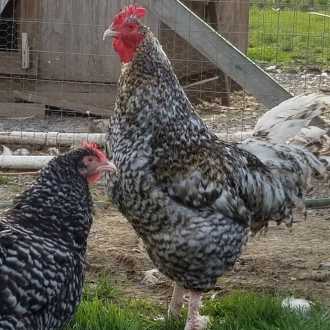 Malines are another kind of chicken that’s considered a dual-purpose breed. Malines usually lay lots of eggs and are commonly raised as a meat source. Their eggs are extremely large and have a light brown color to them. Malines are also known for their size and their beauty. These chickens can weigh up to 12 pounds for males, 10 pounds for females, and come in a wide array of colors. However, the black cuckoo pattern is the most typical patten amongst the breed.

Just like many of the breeds listed here in this article, Malines are also very gentle and love to be around humans. Whether you have other animals on your farm or little children around, Marlines are easygoing chickens that are pretty easy to take care of. They’re useful, pretty, and an all around fun bird to raise. 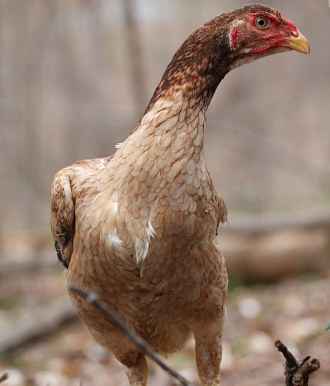 The Malay breed is a unique kind of chicken that’s much different than most of the other largest chicken breeds. This chicken is tall, has thick bones, a wide skull, and is very aggressive. With an average height of 25 to 30 inches, the Malay chicken stand taller than just about any other breed of chicken.

The Malay chicken needs a lot of space. The more confined they get, the hostile they become. This is especially true if you have a lot of different animals on your farm. The Malay chicken is also a seasonal egg layer, and they don’t lay very many eggs either. If you’re looking for a chicken with superior egg laying abilities, the Malay is not a good choice. They are however a excellent meat source if that’s what you’re looking for. 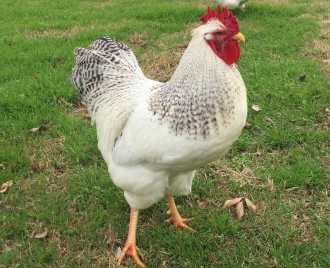 The Delaware chicken was created when George Ellis crossbred a Barred Plymouth Rock rooster and a New Hampshire Hen in the year 1940. These chickens became extremely popular broiler chickens due to their white feathering. For people who don’t know, dark feathering tends to leave dark spots on the chicken’s skin. For many, this is an undesirable feature. 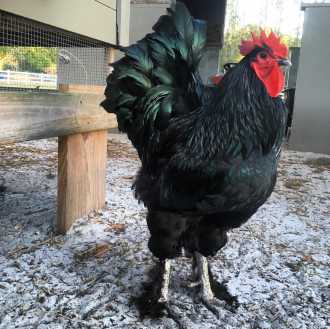 This is one unique breed. For starters, the Langshan chicken is jet black in color and very beautiful. Its appearance is quite striking. Another thing that makes the Langshan stand out from the rest of the breeds is their height. These chickens tend to grow much taller than other breeds and typically weigh an average of 9.5 pounds for males and 7.5 pounds or females.

The Langshan chicken is a skilled forager. They can also lay several eggs in a year and are considered a pretty tasty meat. If you’re looking to invest in a quality chicken, then the Langshan might just be the breed for you. Not only are they quite useful, they’re also pretty friendly birds as well. 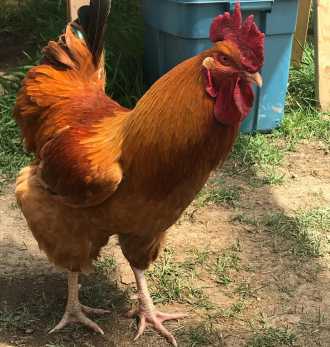 The New Hampshire Red is characterized by it’s big, thick, red body. Its reddish feathers grow fast and protect it from colder temperatures. This chicken doesn’t just look intimidating, it is. The New Hampshire Red is a very aggressive bird and sits high on the pecking list. If you do decide to raise this breed, make sure you give them enough room to live.

Another characteristic of the New Hampshire Red is that they are considered to be a duel-purpose chicken. Although this chicken breed lays several eggs each year, they’re mainly raised as a meat source.

Now that you know what the largest chicken breeds are, their unique differences, and their benefits, you’ll be able to properly choose the proper breed for your needs. Whether you’re wanting eggs, tasty meat, or just a friendly pet on the farm, there’s a chicken breed that’s right for you.

The largest chicken in the world is the Malay rooster which can stand up to 3 feet tall.

@TheChickenExpert, Would that not be the TALLEST chicken and not the BIGGEST?

What about gilyan breed from Dagestan ?

The above information is incorrect for Jersey Giants. They also come in Blue and Splash. The blue was accepted in 2002. Splash is not an accepted color for showing as of yet.