When you’re beginning a wood project, one of the most important decisions you will make is the type of wood to use. There are several affordable, decent options, including poplar, pine, and fir. However, each type of wood has its own benefits and drawbacks, so it can be tough to decide which one to select for the process.

For the purposes of this guide, we are going to cover the features and issues of Douglas fir vs. pine. We will talk about hardness, similarities, grain, and appearance, cost, weather resistance, and other factors that may impact your decision about which type of wood to use. 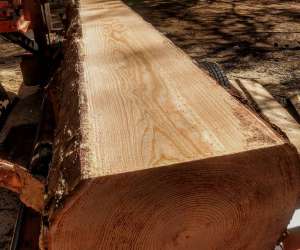 First of all, it is important to know that there are a number of varieties of pine. We will primarily be discussing Douglas fir vs. yellow pine, as it is one of the most commonly available and popular wood types with woodworkers. The hardness and strength factors will differ a bit if you are considering Douglas fir vs. eastern white pine or Ponderosa pine vs. Douglas fir. In the same way, there are also a number of varieties of fir, including hemlock fir, which can affect your decision differently if you are thinking about hem fir vs. pine.

Both pine and Douglas fir are considered softwoods. They are both native to the Northern Hemisphere, and both are fairly popular with carpenters and builders, especially as home construction materials or framing material for cabinets and furniture. They are both aromatic trees with fairly high resin levels in their wood. In both types of trees, knots are rather undesirable and represent a weaker section of the wood. 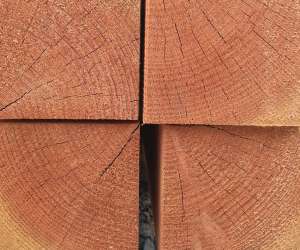 Douglas fir is usually more aesthetically popular than yellow pine because of its pretty grain. The fir tree has a smooth, tight grain that doesn’t tend to twist or warp as pine grain does. Yellow pine grain is typically loose and brain, and if it is not properly handled and prepared, the wood between the grain lines can sometimes swell or shrink, causing warping.

The lovely even grain of Douglas fir provides a uniformity that is coveted for elements like flooring. Since it also has a uniform color, it tends to take finishes very well. You can put almost any kind of finish on a Douglas fir plank, and chances are it will look good. Douglas fir typically yields a more upscale and elegant appearance than yellow pine does. 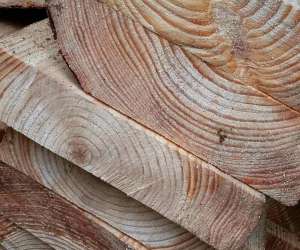 Due to its softness and the presence of sap and knots, yellow pine (and even some white pine) tends to be less accepting of finishes. Usually, workers end up lacquering or shellacking it in some way to thoroughly seal the wood. Pine does have a nice rich color, and once it is finished, its appearance and color can range from a beautiful golden hue to deep amber. It is perfect for a more rustic aesthetic, so it often used for exposed ceiling beams, tables, chairs, and other elements within a home that has a cottage, cabin, or farmhouse aesthetic.

One of the most important qualities of lumber is its hardness. Hardness is measured using something called the Janka scale, which is rated using pounds per feet (lb-ft or lbf). Basically, the industry-standard refers to the wood’s ability to sustain its form and fiber in the face of impact or pressure. Specifically, the hardness test measures how much force it takes to embed a steel ball into the wood. The steel ball measures .444 inches and is driven into the wood up to half its diameter. The force required to accomplish that is measured and assigned as the wood’s rating on the Janka scale.

White pine has a 420 lb-ft rating on the Janka scale. Southern yellow pine (shortleaf and Loblolly) has a rating of 690. Southern longleaf pine has a rating of 870 lb-ft. Douglas fir comes in between the types of pine, with its own rating of 660 on the Janka scale. So it’s fairly comparable to the yellow pines in hardness, though a bit softer than the shortleaf varieties and significantly less hard than the Southern longleaf pine. Still, it’s far better in terms of hardness than white pine would be.

It’s important to keep in mind that just because a wood is called a “softwood” rather than a “hardwood” doesn’t necessarily indicate its place on the Janka scale. There are types of trees that are categorized as softwoods that have a greater hardness rating than some hardwoods. It is always advisable to double-check the rating on the Janka scale if you are not sure. As we have seen, even within kinds of trees like pine, there can be different hardness ratings for specific varieties of that species.

Fir is typically the more expensive of the two types of wood. This is partly because pine can be tough to work with due to its knots and its other textural elements. Douglas fir plywood and regular lumber are typically more available and desirable for applications like flooring, decking, and other construction elements. By contrast, yellow pine is typically only used to make furniture, and sometimes cabinets and chests.

When it comes to handling weather conditions and moisture, Douglas fir is the clear winner. Like any wood, fir will react to moisture, and its fibers may contract or swell. However, it will usually return to the same shape once it dries out. That’s a significant benefit for builders and woodworkers.

By contrast, pine reacts very poorly to moisture and weather. When the softwood between its grain lines expands or shrinks, that change is permanent. Any warping or swelling is then permanent. That’s why it is so very important to completely and thoroughly coat any pine furniture or pieces with sealer and varnish to ensure that not the slightest bit of moisture can get into the wood itself.

The reliability of fir, even under the changing circumstances of weather and humidity, makes it far more desirable for most projects, especially if we are talking about cabinets, flooring, decking, or the actual structural components of a home.

One problem you may run into with both Douglas fir and yellow pine is locating truly high-quality lumber. Tight-grained Douglas fir boards from older trees are increasingly rare due to over-harvesting and demand. The same can be said of older, tougher yellow pine. You’ll find plenty of younger wood, but it will have wider growth rings and more knots. The really nice straight-grained wood from mature trees is just difficult to come by these days.

With that said, it is important to keep an eye on where you are sourcing your lumber. It is best to support companies and providers that actually care about reforesting and responsible use. Unfortunately, too few lumber companies are truly earth-conscious and sensitive to the future of the forests. When you find a supplier that you believe is both responsible and reasonably priced, try to support them as much as you can.

Keep in mind that if you’re observant and you have a good network with local renovators, you may be able to score some secondhand Douglas fir or pine lumber of high quality. You can find superb quality pieces in old buildings.

If you know of a building that is going to be torn down to make room for new modern construction, see if you can arrange to take a look inside prior to demolition. Check the rafters, support posts, and flooring, and you just might find seasoned lumber and boards that are true treasures. You want pieces that have structural integrity and are untouched by rot.

Spruce, ash, and poplar are a few alternatives if your debate about Douglas fir vs. pine isn’t shaping up the way you want. There are also options like cedar, redwood, larch, oak, and hemlock. And of course, if you are willing to pay a lot more, you can get into the high-end woods like maple, cherry, walnut, and mahogany, or even into the realm of exotic lumber.

If you have your heart set on using a particular wood for a specific project or element within your home, it might be possible to make it work, even if another kind of wood would be better. You just might have to put in extra time treating and pre-conditioning the wood to make it suitable for what you want to do.

Sometimes, you will find that investing the extra money in a finer quality of wood with greater hardness and a better grain will be worth it in the end. And if you are dealing with structural elements in your home, it is always better to go with quality and invest extra money in ensuring that your home is as solid and secure as you can make it. Don’t sacrifice hardness, durability, resilience, and reliability just to save a little money. There are other places where you can save a bit on costs.

I'm deciding between Alder, Douglas Fir, and Poplar for building chairs that will mostly be indoors but sometimes outside for late night events.

Alder is smooth but can have lots of knots. Poplar has no knots but can be hairy and typically is not quartersawn. The heartwood is rot resistant. Douglas Fir might make me breath too much aroma over time, and can wear down blades faster, but is very stable and rot resistant. Finding good fir is an issue though. Most is in planks, not the 3/4" slabs I want.

I am deciding between Douglas fir or SPF lumber yard stuff and yellow cedar for a strong durable small boat. I think I will have better results with using scarfted pieces of yellow cedar to make planks for boat. I believe that the old time Japanese wooden fish boat builders used yellow cedar for the frames and maybe for planking?