All of the issues listed above are able to be repaired besides a crack in the porcelain. In this situation, it’s best to just invest in a whole new toilet.

Lack of Water in the Tank

Once you have properly adjusted the floater, perform a couple test flushes. If the water level is still not where it’s suppose to be, reposition the floater and again, flush your toilet a few times. Keep repeating this process until your tank’s water level is right.

Another reason why your toilet bowl water level may be dropping could be because of a partial blockage. In this situation, you want to start by using a plunger to flush out whatever it is that’s stuck.  If using a plunger still doesn’t solve the issue, then the next step is to use an auger. To use an angler, simply insert it into the drain until you get to the clog and then crank the angler until the clog is removed. If you don’t remove the blockage at first, try again.

It’s also good to inspect whether or not the vent opening on the roof of your home has been blocked or contains debris inside of it. If there is a blockage, using your garden hose to pushout anything that may be stuck in the vent.

Broken parts and hardware may be another reason why there is a low water level in your toilet bowl. Overtime, things ware out and need to be replaced. These things can include a broken valve arm, a cracked fill tube or even a bent or misaligned flapper. All of these problems are fairly easy fixes for even the individual with little plumbing experience.

What Is a Pipe Chase? 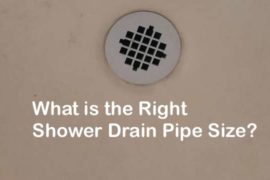 What is the Right Shower Drain Pipe Size?

Wet Vent Plumbing, What Is It? How Do You Utilize It?