When deciding whether PEX vs. PVC is the route that you want to go, there are a lot of things that you have to consider. Both of them have many different benefits and drawbacks, and this can depend on the type of project you plan on doing.

PEX tubing is made up of Cross-Linked Polyethylene whereas PVC pipes are made up of Polyvinyl Chloride. Both are great options for almost any kind of piping, but there are a total of four different types of pipe that you could consider for your home renovation or DIY project. These are copper, CPVC, PVC, and PEX. Each of these options has certain things that they are good at and certain things that they are not.

You should always consider your goals when picking, which is the one for you and know the pros and cons of each. Think about how long you want your pipes to last, what you are using them for, and where they will be placed. Keeping this info in mind will help you make the best decision.

PEX vs. PVC: Heat and cold 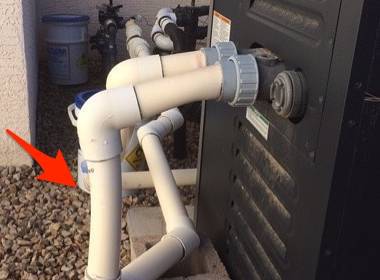 One of these factors you should consider is how each pipe handles heat and cold. While PVC can hold up to high pressure just fine, it does not do so well with hot water.

The hot water affects the PVC making it unsuited not only for hot water but for any water that is for drinking.

Another downside is that PVC is not flexible and will need connections at every bend. This means that there are more places where a leak can start. It also does not help the pipes should the water that is in them freeze, making this option the most likely to burst.

However, PEX can handle hot water just fine and, more than that, it also has some ability to retain heat. This fact can help with heating costs if you use a lot of hot water. On the other side of the spectrum, PEX rarely bursts even when the water in the pipes freezes.

Whatever you need a pipe for, either PEX or PVC is almost sure to meet your needs. The cost of these two options can vary widely depending on the quality or grade of piping you choose to go with. Each of these options also has a slightly different lifespan that should also be taken into consideration when thinking of the cost.

For home projects and craft where you will not be using it for drinking water, PVC piping is generally the best option to go with. PVC pipes tend to be easy to find and are by far the cheapest option. Cheap PEX pipe can be the same price as CPVC, or more expensive kinds can be nearly cost as much as copper pipes.

PEX pipes also last nearly as long as copper with a lifespan of around 40-50 years. PVC has a very long life when it is kept in the right conditions, sometimes lasting for as long as 70 years.

Once its usefulness is over, however long that is, it can also be recycled which cannot be said for PEX pipes. However, unlike the other options, CPVC needs to be replaced every 20-25 years and is more expensive than PVC.

Another factor in when it comes to cost is the position that the pipes will be and how hard or easy they are to install. If you are replacing pipes that are in a wall, for example, then it will be much more expensive than if they are not. That part of the wall will have to be demolished and then fixed back again afterward.

PVC is the cheapest option out there and the easiest to find. It comes in any length or size you might need it, and thanks to its stiff frame and the various fittings available, it does not require any metal or wood framework to support it. Like the other options mentioned, it will not rust or corrode.

The one other thing besides heat that can change it over time is UV light, though you can paint it with a UV resistant paint to help with this. The UV light can over time make PVC brittle and therefore more likely to bust or spring a leak.

Because of this, it is best to use PVC pipe in places where it will get no sunlight or any other kind of direct light on it. This means that when it comes to PVC vs. PEX underground, that PVC is much better suited for this kind of job.

PEX has quite a bit in common with PVC pipes. It is made by melting high-density polyethylene and extruding it into the form of a tube. When it comes to PEX pipe vs. PVC, both will break down under UV light.

It has the added benefit of being slightly bendable, meaning that there might be less damage to your walls when you have this option installed. Because of this bending, there will also be fewer connections required. Fewer connections mean not only fewer pieces but also means fewer places where a leak can start.

On the downside, PEX is not very environmentally friendly should this be a concern for you. It is also something that cannot be recycled when it is replaced, which only adds to this.

Finally, PEX pipes are also compatible with copper pipes. So if you already have some copper piping and want to add onto it, then this is perhaps the best option for you.

What about CPVC and Copper?

On the other hand, this chlorinated coating also makes CPVC piping more expensive than PVC, which is why it is not used as much. However, it can be more flexible than copper piping which still makes it a good option since this makes it easier to install. It is also still cheaper than copper and even PEX in most cases.

Though it is more likely to leak than copper, this rarely happens. Like copper, CPVC pipes can also handle a wide variety of temperatures, and they are even environmentally friendly like PVC.

Copper is exceptionally pricey and is the most expensive of these options that you can go with. This price does come with a lot of benefits, however, including a long life. Some brands of copper companies even give 50-year warranties, and this can be a huge plus.

Because copper will bend sooner than it will break, it is considered an excellent option for houses in earthquake-prone areas. If your home does get damaged in an earthquake, your copper pipes are likely to be one less thing you have to think about.

Copper pipes do not rust and can handle extremes in temperature without any problems, but they might react with their environment, and as a result, they can corrode, usually from the inside out. They are UV resistant and can also resist bacteria buildups which helps keep your water clean. Because of this, it is a great option, even in places that might be in direct sunlight. It also looks nicer than plastic-looking pipes.

On the downside, having copper pipes means that some of the copper will more than likely end up in your water. This fact not only makes your water a little harder but the digestion of copper from drinking water is supposedly bad for you and many people advise against using it for drinking water.

Added to this, some plumbers who have little experience with this kind of piping will sometimes refuse to work with it. All in all, if you are need pipe that will face some sunlight and you like the look of copper, then this is still a great, though expensive, option.

When you are moving into a new home, one of the things you should learn about is the plumping. You should be able to learn both the kind of pipes that are there and when they were installed. Knowing this information will give you a good idea of when they are getting close to the end of their lifespan.

Not only will replacing your pipe help prevent leaks, but it will also do a couple of other things for you. Most of the time, when new pipes are installed, it helps the water to flow faster since old pipes can contain build up in them. Getting rid of this build-up will also help make your water safer to drink and, if you are selling, will increase the value of your home.

No matter why you need, some new piping installed there is a specific process that you use. First, you should get the estimates of at least two different plumbers to see what they will charge for the project you have on hand.

If any of the work you need to be done will involve having to take out part of a wall, then you should count on the project taking at least a couple of days. Plan for this if possible, and try to pick a few days that would be best for you.

For extensive work, you should plan on closer to five days for the job. You should also verify that the plumber you hire gets a permit to work on your home. It is vital that your plumber does this since many insurance companies will not pay for any damages due to faulty pipes without this.

Some plumbing companies will have a person on their staff who will take care of the walls before and after. Others contract out to another company that they are used to working with. Whichever the case may be, you will want to make sure that this price is included in the estimate you get.

Once the new pipe has been installed, you will want to have it officially inspected. Doing this usually takes just a few hours and can save you a lot of time later on if you have any problems. Once this has been done, the final step is to close everything back up and to clean the area. Sometimes setting up a fan to blow of the area can help speed the drying up.

Thank you Josh for taking the time to write a VERY informative review of each piping option. As a DIY homeowner, I tend to do everything myself; from minor plumbing, to minor electrical, to framing, tiling, etc... However, that means I am a jack of all trades, but a master of none. So, these reviews are helpful in choosing the proper product for my house. Thank you and Jesus bless you sir.