Not everyone wants or needs a tub and shower combination in the home. If you’re only interested in having a nice standalone shower, you’ll find a variety of excellent ways to create a beautiful one in your bathroom.

However, most showers need some sort of rim or curb at the bottom to hold in excess water. How tall should a shower curb be? We’ll talk about this and other important considerations for shower curb height in this guide. 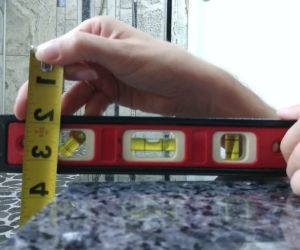 In the United States, building codes typically require tile shower curb height to be a minimum of two inches above the top of the drain. However, that doesn’t necessarily mean the curb itself has to be two inches high.

Suppose you have a shower floor that slopes down to the drain. If the slope covers about a 1/4 inch per foot, and the curb is three feet away from the drain, you’ve already built-in 3/4 inches of that required height. So all you need then is a curb of 1-1/4 inches in height.

If in doubt, always check with the local inspector first, before you begin crafting your shower stall and shower curb. You want to be sure that you’re doing what the inspector wants as far as minimum curb height for shower stalls in your area.

Purpose of a Shower Curb

So the purpose of a shower curb is fairly obvious—it’s there to prevent water from flooding out of your shower stall into your bathroom. You may wonder why you need one—after all, the shower water goes right down the drain, and any splashes are caught by the shower door or enclosure wall, right?

However, suppose a washcloth falls on top of the drain, partly clogging it? What if you don’t notice right away? Water can quickly accumulate in the bottom of the shower, and if there’s no curb, that water would seep under the shower door or curtain and run across your bathroom floor, causing potential moisture damage.

Lots of things can cause an accumulation of water in the shower—backed-up pipes, hair clogs, physical obstructions, even your feet accidentally blocking part of the drain. It’s a good idea to have that curb in your shower as a fail-safe, to hopefully hold in most of the water until you notice the problem and can address it.

If you’re installing a premade or manufactured one-piece shower stall, you don’t need to worry about making a shower curb, as it will likely already be part of the design. However, if you’re building and tiling the shower yourself, you will need to make your own shower curb.

Also, you’ll need a moisture barrier in place to prevent humidity and water from seeping into the subfloor of the shower.

For the moisture barrier, a PVC pan liner or sheeting, or a liquid membrane that can be painted onto the surface of the shower curb, are both excellent options. You could also create a shower curb from cement or coat a wooden curb with a layer of cement, but you’ll need a layer of a moisture-resistant substance over that as well.

Even if you’re constructing the rest of your shower, including backer board, moisture barrier, and tile, you could buy a pre-manufactured shower curb and customize it to fit the space you have available. Purchasing this piece can make your job a lot faster and easier and ensure better protection against moisture seepage.

What Not To Do

You may be tempted just to plop a 4×4 chunk of lumber across the shower opening, coat it, tile over it, and let that be the shower curb. However, builders usually advise against this, as larger pieces of wood like this can warp over time, bowing or twisting until they’re not an effective barrier against shower flooding. Instead, use plywood pieces, 1×4 strips, or 2x4s and build up to the height you need.

The wood in a curb only rots in a poor installation job. The chemicals in pressure-treated lumber are good at corroding fasteners. Glass shower panels are held in place by screwing a “bracket” into the curb. Installers will try to place as few screws as possible in a curb because the screw can pierce the waterproofing membrane, so you want those very few screws to last forever, and not corrode because of the cuprate, chromate, and arsenate chemicals that are forced into the CCA pressure-treated wood.

If you’re concerned about the shower curb being a tripping hazard for someone in the home, you can investigate the possibility of constructing a curbless shower. Again, you’ll need to check in with your local building inspector and find out what’s required, not only for the average shower curb height in your area but with regards to creating curbless designs.

The slope of the shower floor is going to be key here, and you’ll want enough space to make the slope gradual, or the slippery ramp of the shower floor will itself become a hazard. Usually, this type of design involves a structural drop in the floor, so if you want to go curbless, you’ll need to start planning for it early on in construction. You’ll also need to ensure that your bathroom floor includes a moisture barrier and careful tiling, in case of shower overflow.

With careful planning and construction, you can ensure that the water in your shower stays where it’s supposed to, so your bathroom remains damage-free.