One of the most important pieces of equipment in any shower setup is the valve that controls the flow of water and the temperature. Without them, a person could not get the right combination of these things that lets them enjoy their shower.

When that time comes for your Moen shower faucet, you will have to ask yourself, “Which Moen cartridge do I need?” We have the answer for you here.

What is a shower cartridge valve?

We told you that a cartridge valve is part of a shower faucet system. Now we will go into a little more detail about how they work. That way you will know more about them as you go shopping for a new one.

Shower cartridges are used in bathroom shower valves that use a single handle. That is why they need to be made so they can control both the water flow and temperature. It makes for a more convenient experience for the shower user as long as the cartridge valve is working properly.

The valve cartridge itself consists of a moving apparatus that has several holes in it. Each of these holes lines up differently each time the valve is moved. That is how a cartridge valve regulates water flow and temperature. Moen uses this type of technology in its single handle shower faucet setups because it’s the most precise way to control temperature and water flow.

Which Moen replacement cartridge do i need?

Before you can replace your defective Moen shower valve cartridge, you must first be able to identify which type of valve cartridge you have in your particular shower faucet setup. This is done by finding the right cartridge ID number. 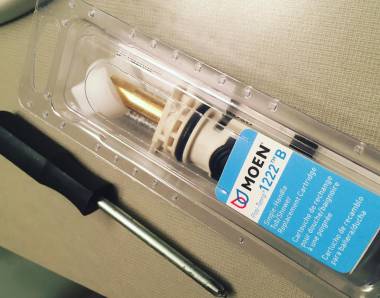 Fortunately, Moen makes this process fairly simple because, over the last 40-years, they have only made four different types of cartridge valves. These are numbered 1200, 1222, 1225, and 1255. If you bought your Moen shower faucet setup after 2009, you will have either a 1225 or 1255 cartridge in a vast majority of the cases.

The easiest way to find the Moen shower valve replacement cartridge you need is to know the series or model number of your Moen bathroom faucet. Exact information for these comes with any paperwork you have received when you first installed the original shower faucet (hopefully you saved it). If not the series number can be usually be found on the underside of the faucet or on the decorative escutcheon ring that goes around it.

Once you have removed your Moen valve cartridge, if you are having problems identifying it by the markings on it, you can go here for help to identify the right replacement cartridge part number.

It has helpful cartridge identifying information. There are even photos there of the different single-handle valve cartridges that Moen makes. You can also call Moen customer assistance at 1-(800)-289-6636 for help.

How long does a Moen shower valve cartridge typically last?

Moen cartridge valves will usually last 20-30 years under normal circumstances. That is an outstanding amount of time compared to other shower valves that use lower quality ceramic cartridges.

Like any mechanical operating product that also deals with water under pressure, they still may fail prematurely on occasion. Moen cartridges from older shower valves are still readily available in the plumbing marketplace too.

The cartridges themselves are well-built and not cheap (expect to pay around $30 for a replacement one). They are made so well that the technology that goes into them has not changed much over the last 40 years. Moen shower faucet products come with either a 5-year warranty or a limited lifetime warranty, so you should contact Moen customer service to see if your bad valve cartridge may be covered under warranty.

WHY DOESN'T MOEN JUST IDENTIFY THE CARTRIDGE ON THE PART? MY CARTRIDGE IS MARKED MOEN 149239, LOOKS VERY LIKE 1222 CARTRIDGE, BUT WOULD BE GOOD TO BE SURE BEFORE BUYING.

"Moen cartridge valves will usually last 20-30 years under normal circumstances. That is an outstanding amount of time compared to other shower valves that use lower quality ceramic cartridges" Just a little confused about this statement. Are you saying that older Moen legacy cartridges that use rubber parts, last longer than ceramic disc valves? Or that Moen's new (and unproven) Duralast cartridges will last longer?

Does moen send you replacement parts? I don’t have my paper work I bought it 2015. It’s the single handle shower faucet.

I replaced a moen shower cartridge yesterday 1222 b model because original shower handle was very stiff and hard to turn. Worked fine after replaced. Water running fine but still very stiff to turn. Any idea why? Or what I can do to remedy problem? Thanks in advance.

@Sheri, you might have to use dielectric grease to lubricate the cartridge. My new shower faucet is also fairly stiff, but last for 3 years before it gets stiffer. Good luck.