Have you ever installed a dishwasher before? If not, you may be surprised to learn that dishwashers aren’t foolproof. And one significant flaw in dishwasher design has made it common practice to include something called an “air gap” when you install one in a home or break room.

The air gap itself can be problematic, which is why some people look for other ways to solve the issue. Find out more about dishwasher air gap alternatives and why they are necessary.

Why is a dishwasher air gap necessary?

Your dishwasher drains its runoff right into the plumbing system of your kitchen. While the drainage system usually works without a hitch, there’s a faint chance that a little of that filthy water backing up into the dishwasher and re-dirtying the dishes that have just been washed. There’s also the possibility that some of that dirty liquid could enter the stream of clean water running to your tap.

To prevent this kind of contamination, you have to ensure that there’s an air gap in the drain hose of the dishwasher. This isn’t optional; it’s required by building codes in most areas. The easily visible part above the counter usually resembles a small cylinder, often silver chrome in color. You’ll see it located at the rear edge of a typical kitchen sink.

What are the dishwasher air gap options?

There are two primary ways that a homeowner or contractor can accommodate the building codes and prevent backup of dirty water into clean areas or systems.

One method is by purchasing and installing a dishwasher air gap fitting. This fitting usually attaches to the sink or the counter, and it connects to the dishwasher hose. Designed for the safety of the home’s residents, the device creates a pressure break that blocks filthy water from seeping back into the dishwasher and ruining the clean dishes. The air gap fitting links either to the garbage disposal or to the drain itself. It’s a basic yet useful preventative measure.

However, if you’d prefer not to use that fitting, there is a dishwasher air gap alternative. You can make a “high loop“, a unique configuration of the drain hose that takes the line up above the water level. The loop is installed beneath the sink base in the cabinet. It’s usually hooked up to the drain, but it can also be linked to the garbage disposal.

There is also one more option – standpipe. The vertical pipe located directly above the P-trap is called the standpipe. This pipe needs to be at least 2-inches in diameter and vented regularly. Standpipes are commonly used to quickly drain the water in washing machines between the fill and drain cycles. However, some homeowners incorporate them under their sink as an alternative to installing an air gap.

Installing a standpipe under your sink as a way to drain the water from your dishwasher isn’t the best option. The reason being is because compared to high loops and air gaps, this set-up is just not practical, and it’s quite complicated too.

In addition to this, using the standpipe in this kind of set-up demands a lot more plumbing work than air gaps and high loops. Typically, most professional plumbers would advise against using a standpipe to drain your dishwasher when there are more effective ways.

How to implement a dishwasher air gap alternative?

If you’re planning to use the high loop method, you need to check your local building codes first, just to make sure that your area permits the dishwasher air gap alternative rather than the actual fitting.

It should measure at least 32” above the floor.

If you’re going to connect the high loop straight to the drain, you’ll need to draw out as much extra length from the existing drain line as you can to make the loop. Arch it up under the sink, against the underside of the sink.

Attach a strap or pin to hold this loop in place. Then, grab the end of the drain line leading from the dishwasher. You’ll need to link the lines with a Y-branch piece and a hose clamp. Make sure the T-branch tailpiece you use is the perfect size match for the drain hose. 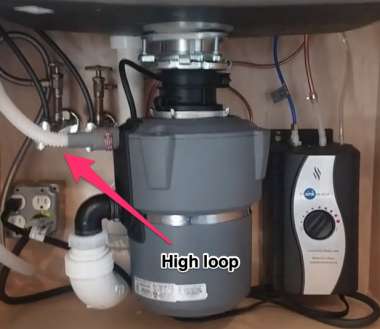 Is a check valve an acceptable air gap alternative?

Check valves perform a similar function to the air gap in that they block backflow into an area. So, in theory, a check valve should keep disgusting water from being regurgitated into your dishwasher with your clean dishes.

However, the check valve isn’t designed to deal with the tiny pieces of food that can sometimes go through the dishwasher drainage system. If a scrap of food became stuck in the opening of the check valve, it could get partially blocked, unable to close like it’s supposed to. And if the valve is stuck open, it won’t prevent backflow like it’s supposed to. That’s why, in most areas, check valves are not up to code and are not permitted as a dishwasher air gap alternative.

The last thing you want is raw sewage seeping into your dishwasher. Rather than trying to find a shortcut, make sure you implement one of the acceptable air gap fittings or use a code-permitted dishwasher air gap alternative like a high loop. If you aren’t sure whether or not you’ve done it right, call in a knowledgeable friend to test the system with you, or hire someone to check your work and perform any necessary tweaks.