We don’t usually think of our toilets as items requiring regular maintenance aside from cleaning. While toilets generally are not a high maintenance item, it is important to understand how they work and what we can do to keep them working properly and efficiently.

Recent research has shown that many common toilet cleaning products can damage the rubber flapper causing significant leakage. Dropping certain toilet bowl cleaners (usually in the form of large white tablets) into your toilet tank may result in damage to the parts within the tank, especially if you do not flush your toilet at least once a day.

Some manufacturers may even void the warranty on those parts. If you chose to use these cleaners, the toilet must be flushed at least once per day. As an alternative, use the in-bowl toilet cleaner rather than the in-tank cleaners.

Tank — The tank is the top portion which holds either the freestanding water to be flushed (gravity-fed) or the pressure-assist cylinder (pressure-assist). On a gravity-fed toilet the tank houses the fill valve (frequently called a “ballcock”), the flush valve (usually including an overflow tube with a flapper and flapper seat) and the flush or trip lever. These parts are called “trim.”

Tank Lid — It’s the top most part of your toilet tank and covers the mechanisms inside your tank.

Bowl — The bowl is the lower half of the toilet used to hold liquid and solid wastes prior to flushing.

Water Spot/Sanitary Seal — This is the water surface that you see inside the toilet bowl after the flush is completed. This water in the bowl assists with the movement of solids into the trapway and provides a liquid seal in the trapway so that sewer gasses don’t pass from the waste line into your home.

Evacuation – In toilet talk, this is the flushing process that removes liquids and solids from your bowl.

Shut-off/Supply Valve – The valve on your wall near the base of the toilet with a round or oval handle that allows you to shut your water off while servicing the toilet.

Supply Line – This is the solid or flexible line between the shut-off/supply valve and the connection on the bottom of your tank (fill valve fitting).

Billy Bolt Set – A package of “T” shaped bolts, flat and dome nuts, and round and/or oval washers used to connect the toilet bowl to the closet ring.

Closet Ring – The metal or plastic flange that is permanently installed at the end of your waste line (at floor level) and has slots for the “T” bolts/Billy-Bolts. The inside diameter is normally three to four inches. The closet ring mates with the outlet on the bottom of your bowl and provides the means for evacuation. 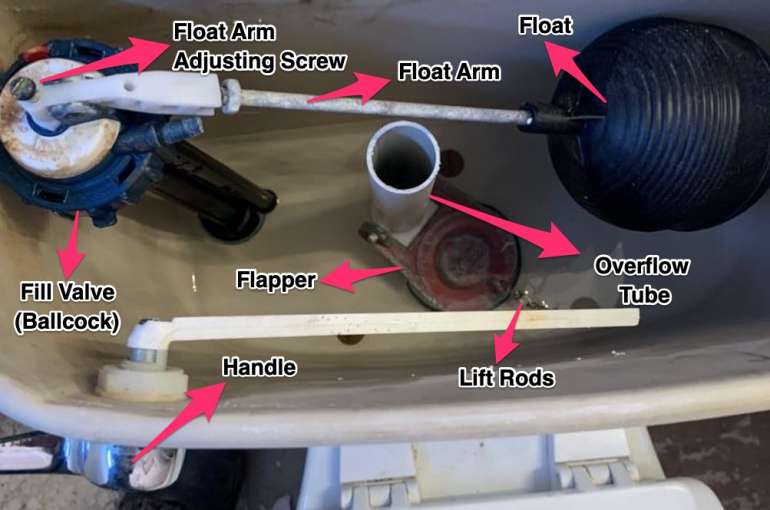 Fill Valve (Ballcock) – You will only find this in a gravity-fed toilet. It is the tall mechanism you see inside your tank (left-hand side) with a float connected to it by means of a metal rod or plastic arm. Or, instead of a float mounted at the end of a rod, it can have the float sliding up and down the tube/barrel of the mechanism itself.

Float – The bulb-shaped sphere on the outer end of the float rod/arm OR the can-shaped float that slides up and down over the fill valve tube.

Float Arm Adjusting Screw – This screw is normally only found where the float is connected to the shut-off lever by means of the metal rod or plastic arm. When turned clockwise, this screw causes the water flowing into the tank to shut off earlier. The same effect is accomplished by moving the stiff wire link downward using the adjusting clip for the slide-type float mechanism.

Douglas Flush Valve – You will find this in most gravity-fed toilets. It is the mechanism you see directly in the center, inside your tank. On one side of it, you will see a hollow tube approximately one inch in diameter (the overflow tube). Connected to the tube by means of “trunion mounting ears” is the flapper. The flapper regulates the amount of water that passes from the tank into your bowl during the flush cycle.

Overflow Tube – This is the approximately one-inch diameter hollow tube to which the refill tube is connected. This is the passageway for the water making up the water spot/sanitary seal to enter the bowl. When the water level is adjusted too high, then water will flow from the inside of the tank into this tube and into the toilet bowl.

Refill Tube – This is the small plastic tube (approximately 1/8-inch in diameter) that is connected near the top of the ballcock mechanism on one end and to the inside of the overflow tube on the other end. Water only flows through this tube during the flush cycle and is the water that replenishes the toilet’s water spot/sanitary seal.

Trunion and Trunion-ring – Trunion “mounting ears” are the approximately 1/8-inch diameter by 3/8-inch long shafts protruding out from the overflow tube near its base. These are the “ears” to which the flapper connects. In some cases the overflow tube is void of these ears in which case, a “rubber” type round “trunion-ring” with two mounting ears slides down over the tube to provide the connecting points for the flapper.

Almost all flappers are shaped, in part, like a “flying saucer,” that is, slight “dome” on top, flat like a “pancake” in the center and then (not like a flying saucer) a “funnel” or “bulb” shape on the bottom.

This whole assembly is usually one molded part and is made of flexible rubber-like material. The center or pancake shaped mid-section is approximately three inches in diameter. Other flappers (or seals) are of a flat washer-like design.

There are four common types of flappers:

Flapper Seat – The hard, round surface at the base (or seat) of the Douglas flush valve. The flapper rests on the seat when the valve is closed. The seat surrounds the two-inch opening at the base of the Douglas flush valve, which is almost always made of PVC material although some older toilets were equipped with brass valves. All water used during the flush cycle passes through the valve.

Flush or Trip Lever Arm – This is the metal or plastic extension connected to the flush valve. It is on the inside of the tank and can be up to six inches long. It reaches from the handle directly to the flush valve or to a location over the top of the flapper.

Even a new toilet needs its water level adjusted within 30 days of toilet installation. That is because there are rubber diaphragms in most all ballcock mechanisms and those diaphragms stretch like a rubber band.

A screwdriver (or even a dime) will be all you need to turn the screw. If you want to lower the level, turn the screw clockwise on those ballcock-type mechanisms with floats hanging off the end of metal rods or plastic arms. If your fill valve has the float sliding up and down the barrel or shaft, then you will need to lower the stiff wire-like link using the “V” shaped clip. With either type, it might take you several tries to get the water to the level recommended by the manufacturer.

On some toilets, the water level is shown as a line inscribed in the porcelain, others will have the line indicated on the overflow tube. If you are unable to find a water level mark then a good rule of thumb is to adjust the level to 1-inch below the top of the overflow tube and then check the level every three months.

In isolated cases the water will creep up on the overflow tube even though the adjustment is correct. If you find water is escaping through the overflow tube, your ballcock diaphragm is likely the culprit. If you value your time, you are probably better off to replace the entire fill valve, instead of replacing just the diaphragm.

It’s probably a good idea to take the old valve to the hardware store and once there, check with their resident plumbing specialist regarding the best choice. There are now replacement fill valves available that are a great improvement over the old dinosaur you have with you. Install your new model following the manufacturer’s instructions.