Several new technologies offer the promise of increased toilet efficiency and effectiveness in the coming years.

Dual Flush
Dual flush toilets are a technology that has been available for years, but the success of new models from Australia has spurred some U.S. manufacturers to offer their own dual flush models. Dual flush toilets provide the user with two flush options – a full flush that uses 1.6 gallons of water and a partial flush that uses approximately half the water or 0.8 gallons. A new dual flush model that uses 1.2 and 0.6 gallons per flush is also available.

One Gallon per Flush
A one gallon per flush pressure assist toilet will soon be available in the U.S. This product is being tested in several end use studies in 2001 and should be available on the market in the coming months. If the product works as advertised it will reduce flush volumes by 38% over 1.6 gpf toilets.

Flapperless Toilet
Since a substantial amount of water is lost due to toilet flapper leaks, there is great interest in developing technologies for flushing that do not rely of rubber flapper valves. One U.S. manufacturer has developed a “flapperless” toilet that employs a tipping bucket design for flushing. The 1.6 gallons per flush (gpf) toilet has the potential to reduce leakage substantially over the life of the product. These toilets are currently being tested in at least one end use study in California and are available for sale.

Waterless Toilets and Urinals
Several products are available that use no water at all. While not designed for the residential market, waterless urinals offer an effective alternative to 3.5 and 1.6 gpf flushometer toilets for office buildings, airports, sports arenas, etc. Composting and incinerator toilets are completely waterless options for some residential toilet applications. These products are expensive and do require some maintenance, but case studies report that users are very satisfied with these products (Vickers, 2001).

European Electric Toilets
In Europe a new electric toilet technology offers the possibility of water savings, but not energy efficiency. The toilet is constructed with a small electric grinder in the trap. The grinder, similar to a garbage disposal, grinds all solids and then uses only a small amount of water to remove the waste into the sewer. These products may not be approved by all U.S. health departments.

Improved Toilet Flapper Valves
Replacing the flapper valve in your toilet can be a confusing process. Some toilets rely on a specific type of flapper to achieve their water efficiency rating. Replace the flapper with the wrong product and your toilet no longer performs properly. There is a movement now to establish national standards for the design and manufacture of toilet flapper valves to eliminate this problem in the future. It is not known if and when these standards may be implemented. In the meantime, it is best to bring your old flapper with you to the hardware store.

Back to the Future?
Some politicians in Washington have introduced legislation to repeal the toilet standards that were signed into law in 1992. Using the slogan “get the government out of your bathroom” these lawmakers want to permit manufacturers to create toilets than use more than 1.6 gallons per flush. Unfortunately, this legislation could undo a tremendous amount of time and effort that has gone into designing, testing, and improving toilets so that they successfully use less water. The impact of the 1992 plumbing standards has been estimated at billions of gallons of water saved per day in the U.S. Eliminating these standards would be a giant step backward for water efficiency and conservation.

Toilets are a popular research subject. They’re an essential part of modern life. Everybody has one, everybody uses them everyday, and everybody has an opinion.

Manufacturers are constantly researching new designs, products, and technologies. To be approved for market, fixtures must go through rigorous tests in which the flushing mechanism is deployed thousands of times. 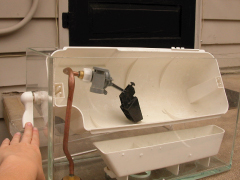 This toilet model, made by Niagara Conservation, flushes by a tipping bucket rather than a conventional flapper.

Currently there are several research projects that are evaluating the effectiveness of several new toilet models as well as customer satisfaction with these products. Sponsored by the U.S. Environmental Protection Agency and two water providers (East Bay Municipal Water Utility District and City of Tampa Water Department), these studies measure water use in single-family homes before and after the installation of high-efficiency fixtures including toilets and clothes washers. Results from these studies should be available in 2002.

There are ongoing research efforts into toilet performance and toilet flapper durability being conducted by a number of independent laboratories. The Metropolitan Water District of Southern California bench tests toilets and flappers to ensure that they meet performance standards. The National Association of Home Builders also has a bench testing lab for toilets.