If you’re unfamiliar with a furring strip, it’s best described as a long, slender strip that’s constructed from either wood or metal. In most cases, furring strips are 1” x 2” or 1” x 3” in size and can be applied either horizontally or vertically. Metal furring strips come in two different styles: 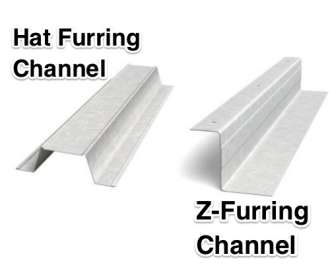 So, for what are furring strips used? Furring strips have several uses. First, these wood or metal strips help carpenters create a level, solid frame that allows them to effectively attach wood, paneling, or plaster to a wall or a ceiling. Second, furring strips are used to create air space between the plaster and the wall itself.

Furring strips are used to provide carpenters a level and supportive structure when they’re applying the finish. Whether it’s the ceiling or the walls, furring strips are essential to ensuring that you’ll always get a flat and smooth surface when the project is complete. When applying furring strips to your walls, they will have to be directly screwed or nailed into the wood or concrete wall. From there, you’ll simply add the next layer.

When using furring strips for insulation projects, carpenters tend to choose flat furring strips. These specialized strips are made to help prevent a thermal short. Whether you use flat or normal furring strips, one thing is for sure, these amazing strips will prevent moisture from getting inside the wall. Why is this important? When moisture gets inside of the walls, it can start to grow mold. Once mold gets out of control, it’s not only bad for your health, it’s also quite expensive to hire professionals to eliminate the mold.

Now that you understand all the uses that furring strips have to offer, it’s also important to fully understand how to properly attach them. It’s important you get it right, because failure to do so could result in an uneven shaped surface, among other problems.

Attaching furring strips over both insulation and concrete

When insulating a wall, it’s always best to go with rigid foam. Why? Rigid foam does not absorb moisture, even in the smallest bit. As a result, you will not need to utilize any sort of vapor barrier whatsoever. However, if you’ve decided to use drywall as a finisher once the wall has been insulated, then your furring strips should be attached every 16 inches from the top to the bottom. By doing this, you’ll provide the drywall something to which it can attach. Follow the steps listed below to attach your furring strips properly.

Like mentioned above, furring strips help keep the backer board from flaring out in bathrooms with tiled walls. To apply bathroom furring strips, you’ll want to: