Benjamin Moore and Sherwin Williams are two of the top paints on the market. They’re both high-quality products that are used widely by professionals all over the world. Many people wonder which of these paints is the better choice, and the real answer is that they’re both great.

Basically, it really comes down to personal preference. The best thing you can do is compare and contrast these two paints to see which one appeals more to your needs. Take advantage of the information below when trying to decide between Benjamin Moore and Sherwin Williams.

These prices sometimes go up when it comes to their special colors. If you’re looking to save a little cash, watch for coupons and deals in your local ads. Companies that buy in bulk might also get a discount on certain sized orders, but you’ll have to contact the company about that information.

Both Benjamin Moore and Sherwin Williams are commonly sold in paint stores. However, the difference is that Sherwin Williams actually have their own stores whereas Benjamin Moore is sold in authorized dealer stores. By either doing a simple Google search or going to the website for these two companies, you can find the locations for these stores and authorized dealers in your geographical area.

When it comes to performance, there’s two main categories you want to focus on. These to categories include coverage and cover-ups. Coverage is how many coats it takes to cover a surface, and if a paint has good coverage, it should take no more than two coats. On the other hand, paint with bad coverage will take more coats to cover a surface and can end up being more expensive in the long run. Typically, the thinner the paint, the lower the performance.

The second category is paint touch-ups. Why is this important? Well first, many painting companies offer their customers a warranty on their services. This means that if the paint chips away, they’ll come back and touch it up. Using a high-quality paint is essential when it comes to making touch-ups. A good touch-up paint will blend into the rest of the wall. A bad touch-up paint will be quite noticeable. As a result, the rest of the wall will need to be repainted. This is why choosing a high-quality paint is important.

Which is the better paint, Sherwin Williams or Benjamin Moore?

Now that you know a little about both Sherwin Williams and Benjamin Moore paints, it’s time to compare and contrast some of their products. By doing this, you’ll have a much easier time choosing the right kind of paint for your specific needs. All of the information used for the products listed below come from the reviews of professional painters and the honest testimonials of past customers. 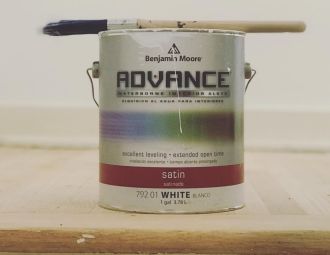 In addition to this, Benjamin Moore’s Advance paint is also more durable too. 2 Cabinet Girls reported than the ProClassic chipped easier during the installation process. The Advance paint is also a thicker paint that requires fewer coats, and when applied onto a surface through sprayer, the shine was also prettier and more appealing as well.

Lastly, Benjamin Moore’s Advance paint doesn’t have an odor like Sherwin Williams’s ProClassic does. This makes for a much more pleasant working experience. The odor from the ProClassic paint isn’t really all that bad, it’s just than the Advance paint is completely odorless. 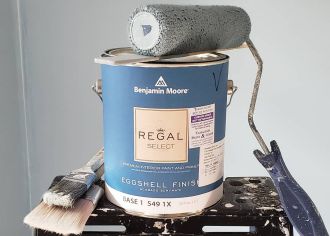 In addition to this, Wirecutter also reports that even though the Cashmere paint is a top-notch interior paint, the Regal Select spreads easier, is more durable, and is more cleanable. The only downfall to Regal Select is that this paint is only available at dedicated retailers and specific hardware stores.

In addition to the products listed above, there other Benjamin Moore and Sherwin Williams products to compare and contrast. Examine the chart below. The information provided here was gathered from a paint test performed by a Nick May, a professional contractor who contributes regularly to the website Walls By Design.

So, now the question remains, how many coats does it take for each of the paints listed above to fully cover a surface? This is important because applying two or even three coats is much more time consuming than applying a single coat. It’s also much more expensive too.

When choosing the right kind of paint for the interior portion of your home, always compare and contrast the cost with the amount of coats you’ll need to apply. Like mentioned above, having to apply a second or third coat is time consuming and also expensive. In addition to this, consider other things like the durability, the shine, and the cleanability of the paint too.

The important thing to remember is whether you choose Benjamin Moore or Sherwin Williams, go with one of their higher quality paints. By doing so, you won’t have to apply as many coats, the paint itself will be more durable, and you’ll be able to clean it better when it’s dry. Higher quality paints also have a better shine. There really are a lot of benefits to choosing either Benjamin Moore or Sherwin Williams’ paints. Give them a try and you won’t be sorry.