Removing plaster from the walls is not necessarily a difficult task, but it can certainly be both time consuming and messy. Any handy homeowner can easily tackle this job. Be warned that removing plasterboard walls can require a great deal of muscle strength to get to the finished product: brand new drywall. If this isn’t a project that you can dedicate a lot of time to, it may be worth hiring a professional so it can be taken care of quickly.

If you are ready to learn how to remove plaster walls and replace them with drywall, here are the steps you need to follow.

How to Remove Plasterboard from the Wall? 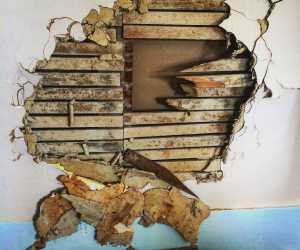 First, you need to actually put a hole in one of your walls. Find the center of one of your walls and hit hard at the top with a hammer until you clear away all of the plaster and see the lath (a narrow strip of wood) beneath the surface. Using the back end of the hammer, drag the hole all the way down to the floor in one smooth motion.

To keep things from getting too messy, place a trash can beneath your new hole. It can catch the plaster as you go about removing it and keep airborne dust to a minimum.

Take a shovel and insert it into the hole you first made at the top of the wall. Leverage the blade to dig into the plaster on either side of the hole, allowing it to fall right into the trash can down below. Continue to work your way around the room, constantly moving the trash can as you go. You may need to make a new hole at the top of the wall as you move from one wall to another. 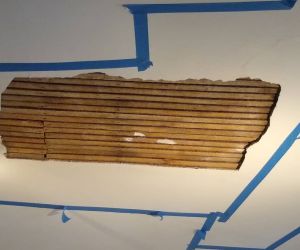 Some homeowners also choose to remove the lath while others prefer to leave it up. These wooden strips can be great for hanging new drywall, but they can interfere if you plan to run wires or electrical through the walls. Decide what you want to do, but keep in mind that removing the lath strips requires a lot of involved labor.

First, you will find the end section where the boards were actually nailed into the stud. Start at the end of the strip and use a crowbar or the claw end of the hammer to pry it loose from the wall stud. Use this method to loosen all of the laths attached to that particular wall stud before moving to the next section and repeating.

Take care not to damage the lath strips at this point because doing so will make them extra difficult to remove. Once you have all of the laths out of the wall, then you can dispose of them. Make sure that you remove any nails that are left in the wall studs or flatten them so that you have a smooth surface to install your new drywall.

How to Remove a Plaster Ceiling

Removing a plaster ceiling is extremely similar to removing plasterboard walls. However, the mess that ensues can be ten times worse. It is much more difficult to capture the mess as it falls from the ceiling. Be prepared to do a lot of cleaning if you want to tackle this major renovation.

The steps to removing your plastered ceiling are almost the same as those used to remove your plasterboard walls. Using a crowbar or the claw end of the hammer, insert it into the ceiling and gain a starting point to peel the plaster loose. Ceilings that are in poor condition often have soft spots where your tool can slide right in with no hesitation.

Drag your tool through the ceiling and continue to use it to peel back further sections. This can be backbreaking work as you stand at the top of your ladder and work overhead. Don’t be afraid to take frequent breaks to rest.

Removing the laths will require the same process. Using the claw end of the hammer or a crowbar, pry them loose from each stud, going one stud at a time until the entire lath can come loose. Never try to break them off, or you will be dealing with a major mess. Then, you need to remove the nails that held the laths so that you can get a smooth surface to drywall over your ceiling.

It can certainly be a chore to remove plasterboard walls, but the end result with new drywall is ultimately worth it. Be prepared for some intense labor and a great mess. If you feel like you would rather not be bothered with this chore, consider hiring a professional who can knock out this job in no time at all!